This is a four-dimensional project which is made up of the following components:

*This project has been ear-marked for social franchise development.

Teaching music in schools is a costly exercise. Teachers need to be qualified (reading music), instruments are expensive and a number of instruments require one-on-one tuition. It can take years for budding musicians to become fairly accomplished. This in itself excludes many children, especially in the rural areas. Yet music remains inextricably linked to culture and should form part of a child’s holistic education. As such, Education Africa has embarked on the establishment of Marimba Hubs. The Marimba is a uniquely African instrument that can be incorporated into curriculae with relative ease. 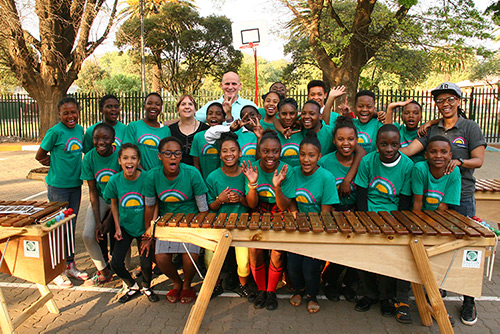 The marimba is the instrument of choice as Education Africa’s music specialist has developed a unique teaching methodology that requires no prior knowledge of music, allowing all children and teachers to learn a piece of marimba music in three parts within 40 minutes. For trainers that do not read music, memory joggers are developed – this is graphic notation for music illiterate persons. The use of dummy keyboards allows for trainers to reach far more children than just the number which is dictated by the number of marimbas available. A class of 30 children can be taught a piece simultaneously. In addition to this, the marimba is a robust, low maintenance, portable instrument that does not need electricity to operate!

The establishment of Marimba Hubs creates job opportunities as a number of potential marimba facilitators are trained in each hub of which several will be chosen to train learners from the surrounding community in the art of playing marimbas. Our National project co-ordinator, Joan Lithgow and her capable team, identify and visit target communities, conduct teacher workshops, obtain sponsorship for the provision of instruments and equipment, and undertake regular follow-up visits to these communities to ensure that the objectives for the project are met.

We have Marimba Hubs in the following areas:

We would like to acknowledge Boys & Girls Club South Africa for partnering with us and enabling us to run Marimba Hubs out of their centres in Alexandra, Bertrams, Soweto (x2) and Vrededorp.
Three of the bands that we train at our Hubs are made up of special needs learners.
Benefits of learning to play the Marimbas

Marimba playing is a wonderful activity that everyone can take part in. Not only is it socially acceptable for boys and girls alike, it also offers emotional, physical, intellectual as well as musical satisfaction. Marimba playing involves players in the very real activity of tapping into their creative potential and as a result increases their self-esteem, whilst stimulating the synapses to link the left and right brain, allowing both hemispheres to be stimulated through one activity.

Research has revealed that one of the biggest challenges educational systems are facing, is keeping school children occupied after school hours and off the streets. Due to a lack of resources and a low morale amongst the children we find a high prevalence of teenage pregnancy, HIV Aids, drug abuse, crime, underage drinking etc.  Depending on the area, one Marimba Hub can impact on 100 – 200 high school and primary school children. Marimbas create social cohesion through Cultural development and preservation of traditional music and through holistic benefits in all aspects of education and life skills. Physically and mentally challenged individuals are not excluded, they can play marimbas and be part of a marimba band. Learners who do not have dexterity in their fingers for whatever reason often find it difficult, if not impossible, to play a melodic musical instrument. The marimba offers these learners the opportunity to play a melodic instrument.

There are many other direct educational benefits to marimba playing:

This project aims at providing opportunities for learners in impoverished, underprivileged communities to go on an Arts & Culture tour to experience different cultures, countries and languages. We aim to give the learners an opportunity to perform in front of a global audience, which many have described as being “the opportunity of a lifetime”. For many of the learners who have attended such a tour, it has been the first time that they have ever been outside South Africa or even on an aeroplane! 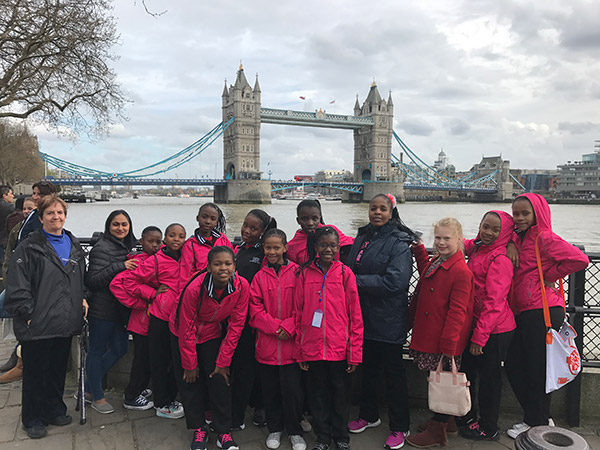 Education Africa facilitates all these tours with the assistance of our international contacts. We also arrange all the fundraising, both locally and abroad, and make all the necessary administrative arrangements associated with taking a touring party overseas.

The following tours have taken place:

2008 – The Masibambane College Marimba Band performed at our Gala Awards Dinner in London. Our guests, which included Sir Bob Geldof, were very impressed with the band

2009 – The Masibambane College Marimba Band performed at six events during a visit to Vienna arranged by us in conjunction with the Austrian Trade Commission.

2009 – The Masibambane College Marimba Band once again performed at our Gala Awards Dinner in London. Following on the success of the above tours, our Board of Trustees gave the go-ahead to officially include the International Arts & Culture Tours as an Education Africa project.

2010 – We took the Masibambane College Marimba Band on a tour to Vienna in June, where they gave ten performances, including one at the world famous Danube Festival which attracts 2 million visitors. The band had the crowd rocking and rolling and received a standing ovation. Another exciting performance was at the Ke Nako Africa Fan Park for the FIFA 2010 World Cup. Sight-seeing highlights included a visit to the Palace, the United Nations and a fun day at the world famous amusement park, the Prater.

2010 – We arranged a tour for the St Dominic’s High School, Boksburg Marimba Band to Austria in July, when they performed at the Life Ball. What was particularly special about this trip is that they performed alongside children from India, Cambodia, Russia, Ukraine and Slovakia, making this a truly international cultural experience. Besides the usual sightseeing tours, the learners were also taken on a trip to nearby Graz as well as the Schönbrunn Zoological Gardens.

2010 – The Thokoza School Marimba Band travelled with us to New York to perform at our Education Africa Gala Awards dinner which was held at the famous Loeb Boat House in Central Park. The band stole the hearts of their American audience – particularly when they accompanied singing sensation Gloria Gaynor as she performed her hit single “I will survive”, proving that even a number 1 hit which is listed in the International Dance Hall of Fame can be spiced up by the beat of African marimbas! The learners loved taking in the sights of New York as well as visiting the South African Consulate General.

2011 – The Marimba Band from Stoneridge Primary School visited Vienna and performed at the “Going into Business into South Africa” day organised by the Austrian Trade Commission. Three additional performances were also arranged in between all the sight-seeing, and the learners were particularly impressed by the famous House of Music Museum.

2012 – Aqua Vista Primary School from Mdantsane Township in the Eastern Cape is invited to participate in an Education Africa International Arts & Culture Tour. We are invited by the Austrian Trade Commission to perform at the Austrian Trade Commission Export Day in Vienna, and the City of Vienna arranges a number of additional performances for the group. As a first for Education Africa, the South African Embassy in Vienna sponsors our marimba group to participate in the Lent Festival in Maribor – the European Capital of Culture – in Slovenia.

2013 – The Aqua Vista School Marimba Band is once again selected to travel to New York to perform at the Education Africa Global Awards Dinner event alongside Roberta Flack. While in the Big Apple, the group takes part in a number of educational sightseeing opportunities.

2013 – The John Wesley Community Centre Marimba Band participates in an Education Africa Arts & Culture tour to the UK. Highlights include a long weekend visit to Windlesham School in Sussex and a performance at the London-based Shaka Zulu Restaurant and Lounge.

2015 – We took the John Wesley Community Centre Marimba Band to the UK. 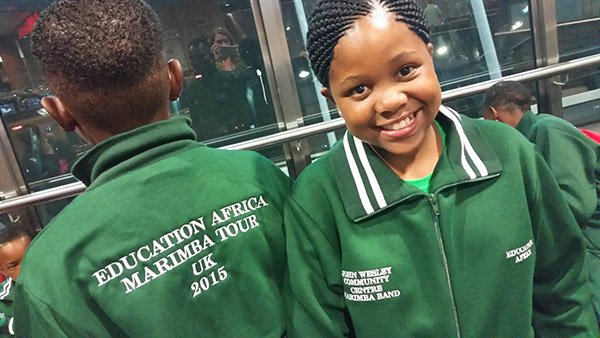 2016 – It was the Goede Hoop Marimba Band’s turn to tour the UK with us. Highlights included a special performance at the ShakaZulu Restaurant in London.

2017 – Carter Primary School from Alexander township tours the UK with Education Africa. The children spent a week at Windlesham School where they participated in workshops and did a number of performances before setting off for London. Besides exploring the city, the band also performed at a Gala Dinner which was held in London’s Clayton Hotel.

2017 – The Aqua Vista Primary School marimba band from East London is again selected to go on tour, this time to Cologne, Germany where they shared their skills with the children of a local primary school and gave a few performances – including a performance on the rooftop of the Sports Museum. The visit to the famous Schokoladen Museum where they learnt how to make chocolate was definite highlight, and the learners also enjoyed an interesting tour to the Roman-German Museum, as well as a visit to the Dom cathedral before heading off to Düsseldorf. A boat trip on the Rhine and a visit to Drachenfel Castle also proved to be extremely popular.

2018 – We took the band from our Marimba Hub at the Boys and Girls Club in Protea Glen, Soweto, to the UK. Highlights included staying at Lambrook School in Berkshire and playing at various corporate functions. We also performed at Nottinghill Prep School and Chatsmore Catholic School.  We had a wonderful Africa Day Fundraising Event at the Virgin Active Riverside Health and Racquets Club where we not only performed, but also had the opportunity to swim in the heated pool.

Education Africa launched The International Marimba and Steelpan Festival in 2012 to create an awareness world-wide of the educational value of marimba playing and to create an international platform for our marimba and steelpan players in South Africa to perform on. As we are dedicated to giving our young children in South Africa the opportunity to travel and mix with young people from other parts of the world, we are hoping to develop our already extensive international network even further through this International Festival. 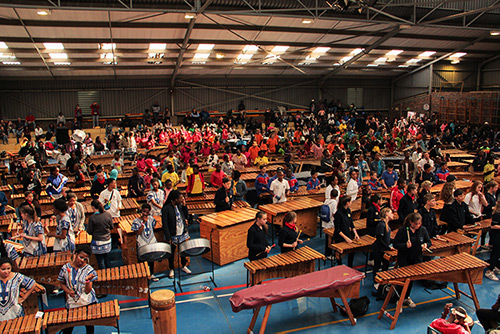 The Festival, which has become one of the largest festivals of its kind in the world, takes place annually in Johannesburg over a period of two days. It is fully inclusive and also caters for people with disabilities – blind, deaf, mentally and physically challenged – as well as people from all walks of life. Over a period of two days, marimba and steelpan bands get together to take part in various competitions divided into age sections and various categories.  In addition to these competitions there are guest performances and workshops. Over 2000 musicians participated in the 2019 Festival, making it the largest festival of its kind in the world.

Sounds Of Celebration
For the past seven years, Education Africa and the Sydenham Hebrew Congregation have partnered to co-host the Sounds of Celebration concert in Johannesburg. The concert is an ensemble of young South Africans celebrating social cohesion through music – an inspiring event which brings together young people from all walks in life, honouring their cultural heritage and unique musical talents on a range of instruments including marimbas, steelpans, string ensembles and pipe bands. Dancers and vocalists are also featured, promising magical entertainment under the masterful directorship of Joan Lithgow, Education Africa’s Marimba Specialist. 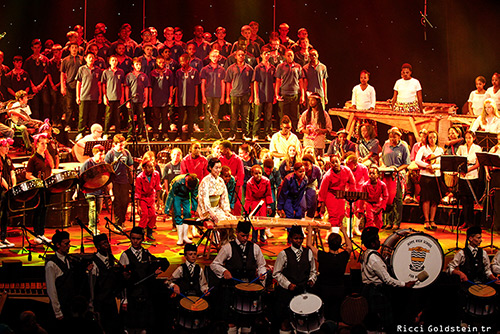 Two evening shows are held for the general public, as well as a matinee for 2000 disadvantaged learners, specifically hosted by Education Africa and the Sydenham Shul. The proceeds of ticket sales for the evening performances go towards the ongoing sustainability of the 16 Education Africa Marimba Hubs. 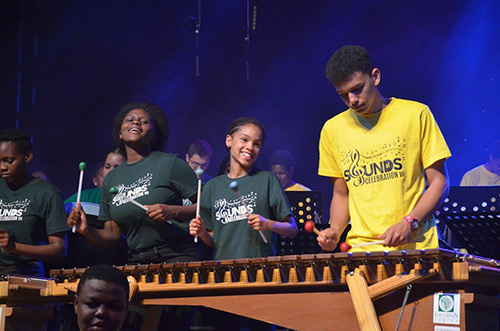 You can help to increase our impact!